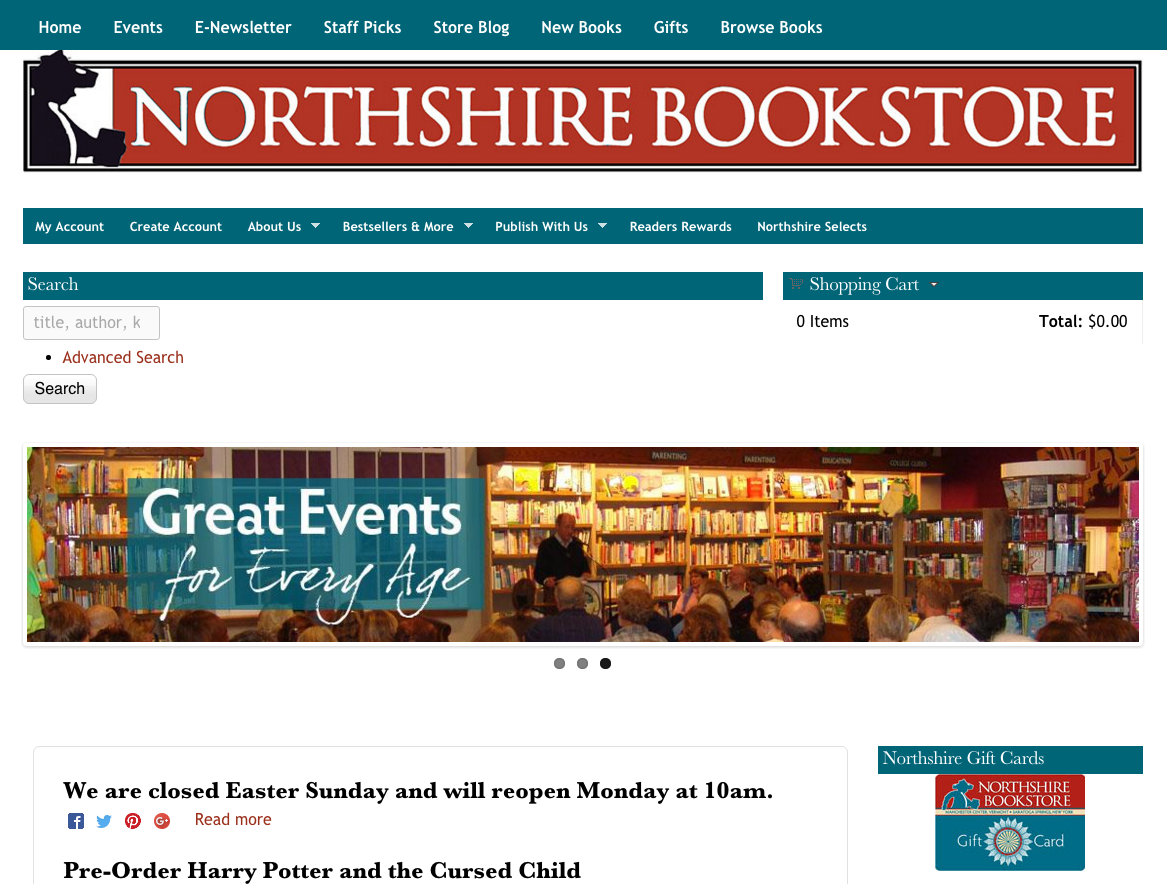 We work hard to enrich our community as we strive to thrive in the dynamic world of bookselling.

Northshire Bookstore is an independently owned and operated 4-story book store, cafe, and gift shop in Manchester
Center Vermont. From modest beginnings in 1976, Northshire has made strategic growth choices that have earned it a reputation as a destination store in the heart of picturesque Vermont. In my first visit to the store, I was delighted by the endless alcoves and themed marketplaces stocked with aesthetically compelling and intriguing items. I felt as though I’d walked into a store straight out of a Harry Potter book and could have happily lost myself on a back stairwell and not emerged for days!

Northshire is currently owned and managed by one of the sons of the founders, Chris Morrow, and has also earned itself a reputation as a prized place to work for the local community, retaining some staff for as long as 25 years. When Chris contracted with Round Sky Solutions for a Discovery Day, communication issues were at the top of the list of presenting issues. With  pressure growing for Chris to devote more time and attention to the launch of a second storefront in Saratoga Springs, the need for streamlining operating communications was growing and less than optimal meeting management and focus were siphoning off critical organizational resources needed to grow the business.

In a three hour Discovery Day, the Northshire executive team of eight, including Chris, were exposed to a set of processes that allowed them to surface and discuss their multiple perspectives on job related issues with refreshing objectivity in a manner that allowed everyone to articulate and really hear one another’s perspective, take ownership of resolution, and identify areas of commonality.

The Northshire e-team was asked to answer a series of four questions post Discovery Day. These questions, such as “What were your main frustrations and challenges before the Discovery Day?” were intended to surface the subjective experience of the participants. Given the brief nature of the engagement, no quantitative data snapshot was taken before or after the engagement, as we do with longer implementations

Given the size of the team, and the complexity of the issues at stake, we were able to process one agenda item per participant in the three hours that we had. With more time available, further agenda items could have been brought to positive resolution. In addition, at least one member of the team that interfaces at the executive level was absent and therefore unable to contribute their unique insight to the process.

The Northshire staff were thrilled with the results from their brief Discovery Day and committed to a Boot Camp training with Round Sky Solutions in early 2013. During this training, the team will learn how to use these processes ongoingly as part of new meeting practices and decision-making process, new framework for information flows, and new relationship to their organizational structure. With these practices embedded at every level in the organization, team members missing from one meeting will have an opportunity to contribute their insight and tensions at any future meeting they are present for, thus not either holding up the movement of work due to their absences or missing an opportunity to contribute where their voice is needed.

The answers to the closing questions revealed that the most useful parts of the Discovery Day for the team were learning a technique that dealt directly with tangible and present business issues. The key take-aways that Northshire reported were a capacity to create an agenda built on current tensions and a clear process for getting everyone involved in solving these real issues. At the end of the day, the team reported feeling unified and also viscerally aware of their need to learn new ways to communicate well and work more supportively as an integrated team.

By the end of the 3 hour Discovery Day, the Northshire e-team had generated concrete solutions and clear actions to take in response to eight key issues brought to the table by the team members. In addition, they’d learned the process for and the value of a tension-driven, solutions oriented approach to meeting time and reported feeling surprised and pleased at the level of movement achieved in such a short period of time. Shortly after completing the Discovery Day, Northshire chose to continue learning how to use these tools through a Boot Camp Training which will begin in early 2013.